Woodbender had the recent opportunity to collaborate with Ernest Motlatsi Russell, the Managing Director of Southern Express on his African Prints Project. Southern Express is a group of companies offering a variety of services from hospitality to engineering and was formed back in 1962 by his late father, Sebatana William Russell in Mohale’s Hoek, Lesotho.

The African Prints Project is a true reflection of Ernest’s commitment to pay homage to preserving the dazzling diversity of the African culture.  He described his inspiration for the project below:

“The design inspiration was influenced by a paradigm of the early 1900 where the aesthetics of traditional African art became a powerful influence among the European artists who formed avant-garde in the development of modern art without recognizing the true origin of such artworks. These avant-garde artists, their dealers and leading critics of the era were among the first Europeans to collect African art for their aesthetic value, and at the time these collections were treated as art of the colonised cultures rather than as artworks and thus held little economic value, the artworks were displayed in pawnshop windows and flea markets. And therefore, the design inspiration signifies the paradigm shift to reclaim our dignity and preserve our heritage in the modern era”. 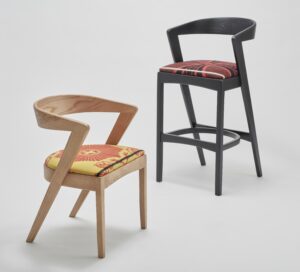 Having previously worked with Woodbender on a restaurant installation he approached us to collaborate with him on his African Prints Project and to showcase his Basotho blanket and Kente cloth designs on our Makuti, Kariba and Vuti styles.

Ernest explains the history of the Basotho Blanket and Kente Cloth:

A blanket was first presented to the then King, King Moshoeshoe I in 1860 by a man named Mr. Howel. The King was by all accounts quite taken with the blanket (“a handsome railway wrapper made of light blue pilot cloth, heavy and hairy”) and wore the blanket in preference to his then neglected traditional leopard skin karosses.

What makes the Basotho blankets unique is the layout of the design, the various symbols used, the bold colour combinations and the characteristic pinstripe. This stripe was originally a weaving fault which has become a unique part of the design and dictates how the blanket is worn. When worn in the traditional manner, the pinstripe runs vertically symbolising growth.

The blanket has become part of not only Basotho’s everyday life but also as a status symbol. To outsiders it became a mark of ethnicity and therefore a token of cultural identification. In fact, Lesotho is the only nation south of the Sahara that illustrates the culture of an entire nation through such an individualistic item as the tribal blanket. The traditional blankets differ from most modern blankets in that they are almost entirely made of wool (88% wool and 12% cotton), hence their rougher and firmer texture.

The Kente cloth, originates from the Ashanti people of Ghana and Cote d’Ivoire. The Ashanti people used to (and still do) hand weave these bright multi-coloured clothes for their kings and noblemen. The elaborate patterns arise from the mixture of different weaving techniques applied to the same band of cloth. The quality of the fabric, and weaving indicates the rank of the person, the best being reserved for the kings. It is worn by men as a toga, and by women as upper and lower wrappers. The art of weaving Kente is passed down only to males, from generation to generation.

Get to know Ernest Motlatsi Russell

Ernest Motlatsi Russell was born and raised in Lesotho. After completing school in Bloemfontein, he moved to Cape Town to pursue a degree in Civil Engineering which led to another degree in Project Management, followed by a Master’s in Development Finance from the University of Stellenbosch Business School. He has been immensely involved in the “built-environment” industry for more than 15 years specifically focusing on the structural engineering component of residential and commercial property development projects.

His passion for interior design and décor styling has been underpinned throughout his career. He has always been an advocate for spectacular finishes to honor and complement the architecture whilst not distorting the usability and functionality of the space or structure.

Before the Blanket Project collaboration, Ernest worked with Woodbender on his first restaurant project, the Southern Express Café in Butha-Buthe, Lesotho.  When it comes to specifying furniture, he is clear that durability and comfort are his top priorities. In terms of design, he finds Woodbender’s products suitable for every style and recommends them for any space.

Get in touch with us to find out how you can customise our furniture, to complete your space.  All our chairs, stools and occasional chairs are fully customisable in terms of timber finish and fabric selection.